Oak Hill is a steep-sided ridge (called a mountain by some locally) rising from the surrounding lakes and rolling hills.  We live and farm up on top, where it is flatter and drier.  Down below the lowest fields, the land drops off sharply into a gorgeous forest of oak, pine, hemlock, beech, sugar maple, and birch.  At the base of the hill is the beginning of the Tacoma Lakes (formerly known as Purgatory Ponds): Jimmy Pond, Jimmy Stream (a wide slow stream running along our land), Buker Pond, and Sand Pond.  These lead to the larger Woodbury Pond, which overflows to Cobbosseecontee Stream, which meets the Kennebec in Gardiner, and ultimately Merrymeeting Bay and the great Atlantic beyond. 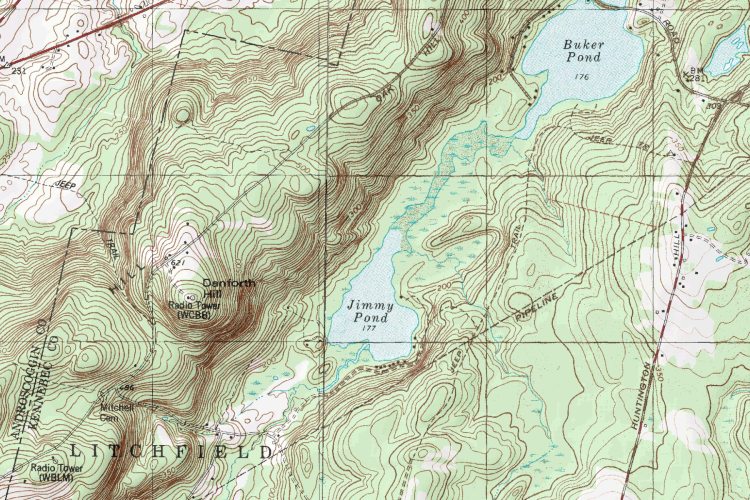 Historically, the road along the ridge of Oak Hill was used as a wintertime route between Gardiner and Lewiston-Auburn, since snow would blow off the road and stay clear.  Needless to say, that was at a time when the land was largely devoid of the tree cover which would otherwise catch snow and slow the wind down.  In an era long before insulation, Oak Hill in winter must have been a godawfully cold place to live.  Cords and cords of firewood, lots of wool, big families, and a resilient spirit evidently kept folks warm enough to carry on.  In fact, in the mid-1800’s Oak Hill had a larger population than today, as attested to by the old barn foundations and cellar holes one finds strolling through the woods.  The miles of stone walls are also a ubiquitous reminder of the generations of devoted labor infused into the land (according to a fascinating book called Stone by Stone, by the turn of the 20th century the distance covered by stone walls in New England was greater than the distance to the moon!)  We can tell by the size of stones cleared that our land was used for cultivated crops as well as pasture and hay land.  There is even a section of land with parallel ridges that we theorize are old plow furrows.  It is a great effort to stretch the mind to understand the timescales of generations and forests, but photographs are a great help.  Just seeing pictures from the 70’s is amazing, where the forest is young and scrubby.  We’ve heard there’s a photo of Oak Hill from across the valley with barely a tree on it…but it’s just legend at this point.  Hopefully it will turn up.

Despite the windswept, barren conditions of those Oak Hill winters, the hill also historically furnished some of the first crops of the year for local markets.  Because of the elevation (cold air drains down to the valleys), the moderating effects of the lakes below, and the light-textured soils, Oak Hill warms up fast and dodges many late spring and early fall frosts that hit the low-lying areas much harder.  We often record low temperatures 10, 20, or even 30 degrees warmer than nearby lowlands.  Last fall our friend farming in Dresden had 4 hard frosts (the first in early September), before we had our first in late October.  One day last winter we got down to 7 degrees, while our friend in Bowdoinham was at -21.  This year we had a 15 degree night, while a friend on the other side of Litchfield had -10.  We did not anticipate this beneficial micro-climate in moving here, but it has been a happy surprise.  We are able to grow good peaches, and we will continue to expand our collection of iffy-in-Maine fruit trees.  Combined with a changing climate, who knows what will be agriculturally possible up on the hill in the future?